Hi, my name is Barry and I would like to tell you about Sebastian who I have recently re-homed from LRSEC.

After losing my Labrador Rolo who I had for 10 years and who was also adopted from LRSEC through Janet Andrews, I contacted my new area coordinator Jane Hunt who I spoke to on the phone and completed an online form.
A few days later Jane phoned with the good news that there was a dog available. I had put on the form that I didn’t mind a dog that needed training, patience and understanding as my previous friend Rolo needed the same.

Jane was particularly anxious about Sebastian as he was 18 months old and had only known a life in kennels and he was totally confused and troubled as to why he was there.
Jane sent us a picture and my wife and I together with our Jack Russell went to meet him at the temporary kennels. The kennel maid brought him out to meet us in the paddock, he was a big bundle of yellow dog pulling on the lead really excited to be in the open.

He was a bit shy and nervous but I could see by the way he was with our Jack Russell who is called Russell that he had a lovely temperament. After walking round the paddock with Sebastian and Russell we adopted him and took him home.
Jane had already done the home check although nothing had changed since we had adopted Rolo.

Once home it was a learning curve for us and him, For us he still had reservations on trust so would lie on the patio outside with the doors open and would occasionally pop his head into the lounge, this quickly progressed to laying in the Kitchen looking into the lounge followed by eventually trusting us enough to lay in the lounge but seemingly with one eye open as if we moved, he did too, to the safety of the garden.

Thankfully this was in the summer. We bought him lots of toys to play with to stop the boredom that he felt while in the kennels. While in the kennels he used to trash his water bowl, he also did this at home but with the help of the toys, Russell as a partner in crime and the stimulation from us this soon stopped.
We had to set some rules of our own and one of those was he had to sit and wait before being allowed to eat his food and as Labs are food orientated this was an easy goal to reach. If the downstairs toilet door is left open Sebastian can be found on the lawn together with what’s left of the toilet roll, so it’s up to us to make sure the door is closed.
He walks lovely on the lead and gets on well with other dogs as being socialised with other dogs is something that he enjoys. We go to dog training although I have been before with Rolo and Russell, It’s good to go for extra support and for advice that someone else has experience of and for socialisation for the dog in a controlled environment.

Sebastian has hip dysplasia and is having weekly sessions currently on the treadmill in the water tank but soon to be in the pool. He settled in really well, can still be a bit shy around men but a real character that enjoys all the attention from people on our walks around the village, a true ladies man if I’ve everseen one!
There are so many dogs that need re-homing. Some are like Sebastian, they need patience, understanding and time to build that trust up so they can flourish into that loving loyal dog that Sebastian has become.
For a dog that used to struggle to come into the lounge who now lays in his bed on his back all 4 feet in the air. He has come on a long way. A friend of mine said when he first met Sebastian and I told him he was a Lab rescue, “well he has fallen on his feet with you Barry”.

I know things will get tougher with his hips as he gets older and we will be there for him and when I’m having a bad day I’m sure a nuzzle or a lick will be hey Dad I’m here.

Many thanks to Jane Hunt & LRSEC

Make mine a Pupicino! By Di Binley

Ralph was matched to us by Jacky just before his first birthday.
He had spent some time in Kennels – with a slightly different name, whilst he waited for us and our elderly chocco, Baxter. He was a proper teenager when he arrived and loved everyone and everything … his favourite game was to put his head down and charge at us and then swerve at the last moment. He also has a very long body and tongue so counter- surfing when he was younger and more supple was a speciality!

We lost count of the number of wooden spoons he chewed up. He really was Ralph-the-Rascal. He grew up when he had his knee surgery (TPLO) and when his younger brother, Haribo, left us. Since then he has been enjoying a more steady pace. He loves having trips out or days with everyone at home.

He is partial to the froth off a coffee which has become known in our house as a Pupicino!

These two gorgeous brothers were re-homed by us in January . Their family had been relocated here from South Africa where they had been used to roaming free on acres of land.

The property they had moved to in the U.K. was modest with a small garden and the boys became increasingly frustrated with their new surroundings. We were lucky enough to find them a wonderful home together with a three acre garden.

They settled almost straight away and are now enjoying the freedom they were used to since tiny pups.

Banjo came into our rescue back in September 2020 . 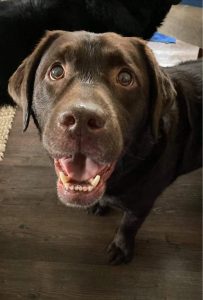 Sadly he had a knee injury which had been left untreated for a lot of years. He was very lame because of the injury and structurally his body was not in good shape because he had been compensating for the injury for so long.

First he had to have a castration operation and x-rays for his injured knee. He was given excellent care in my local kennels and he just loved all the fuss he got on a regular basis. To give him some company, I had him here with me and my dog Charlie as much as I could.

He then went for his knee operation and back to recover in the kennels. because he’s such a lively, bouncy, fun boy we decided it would be the best place for him to recover, which it was. They did a super job with his after op care, second to none. I am very lucky to have excellent kennels near by. Anyway he had his recovery time and I was able to re-home him to a super new home where they were happy to work with his intense rehabilitation. END_OF_DOCUMENT_TOKEN_TO_BE_REPLACED

I have the opportunity to write as I am currently supervising a television advert for a popular pet supermarket featuring a variety of dogs,cats, rabbits, hamsters even a gecko and supervising mostly involves trying not to get in the way.

The opportunity to meet a diverse group of pet owners has highlighted for me the value of owning a pet particularly during the past year when we have had our freedom curtailed by Covid-19. Many of the animals featuring in the advert have been purchased in the past year to help children and adults cope with the isolation of the pandemic.
The children benefit from their pet’s company and learn the responsibility involved with their care whether that be the necessity to carry poo bags or the inconvenience of crickets active through the night which have to be moved to another room to enable sleep.
END_OF_DOCUMENT_TOKEN_TO_BE_REPLACED 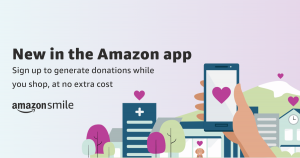 Want to help make a difference while you shop in the Amazon app, at no extra cost to you?
Simply follow the instructions below to select Labrador Rescue South East And Central as your charity and activate AmazonSmile in the app.
Amazon will donate a portion of your eligible mobile app purchases to us.

END_OF_DOCUMENT_TOKEN_TO_BE_REPLACED

I can’t believe it’s nearly 6 years since I travelled to Toddington Services to pick up Gus from Fiona Miller.

I had lost my beloved Cash and my home was too empty without a four- legged friend. Gus was a very sweet boy and very good in the car.

However it soon became evident he was very nervous of noises. He had apparently lived in a very quiet area. After firework night he would not leave the house for nearly 2 days. What an amazing bladder he has! After some coaxing he began to regain his confidence and slowly ventured out. So I started doing some positive training around noises.

We followed the bin men around on a Friday for a few weeks.  (I did tell them what I was doing in case they thought they had a stalker)  END_OF_DOCUMENT_TOKEN_TO_BE_REPLACED

Bentley came to us from Labrador Rescue 3 years ago at the age of 3. He was very, very lively when he first came but settled well as the weeks went on although he does still have his moments of rampage.

He has been, and continues to be an absolute joy to us. He is now age 6 and a wonderful dog.

During the first Lockdown, I took him to a different location each day and posted a picture on Facebook where he has built up quite a fan club.
Here he is at Cromer

When I was Chairman of Norfolk County Council on “Take your Dog to Work Day” I took him to my office at County Hall where he caused quite a stir and even had his picture in the local paper.

Thank you, Labrador Rescue SE & Central, for giving us this wonderful dog (and his predecessor Hugo, a chocolate Labrador who lived happily with us until he sadly passed away aged over 15).

Long may you continue your good, and important, work.

Well, week 12 of lockdown and George is trying to make sense of the world. He’s loving country life and loving the undivided attention of his owners. Our quiet, anxious rescue dog has blossomed into a very confident boy.

COVID-19 has had some very positive benefits. Lots of healthy socially distanced walks and so much time with his new family!

This is George determined not to miss out on a trip to Ikea! Or is our driving really that bad? Really, George, you’d love a trip to the beach far more. George has now become a real country boy. Living in an area frequented by pheasants, he can sniff one out 100 yards away. Fun for him and entertaining for us  to watch but he’s never harmed one; it’s not in his nature. END_OF_DOCUMENT_TOKEN_TO_BE_REPLACED

Our brand new newsletter is here