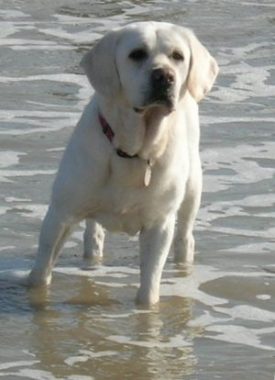 Half a life of mutual adoration   Buddy, a smallish, beautiful light cream Labrador came to us in July 2011 from LRSE&C after his previous owners emigrated without taking him. He was six yearsold and suffering from an itchy skin allergy and badly neglected ears.

We collected him from a foster carer many miles away, and the journey home was delightful, with Buddy in the back of our estate car with his head on Brian’s shoulder peering eagerly ahead. He raced into his new home, instinctively sensing that he would be happy with us.

Buddy adored his new ‘Dad’ from the outset, while ‘Mum’ was seen as a piece of the furniture for several weeks until he learnt to appreciate who it was that tended his ears and other problems. We adored him from day one – but he would not have suited some families. Thought to have been a show dog, he clearly had never played with toys, fetched a ball or learnt to swim. And he never did, so children would not. have found him much fun. His first seaside holiday, two months after his adoption, both puzzled and thrilled him. Unlike our previous Lab, who loved everyone, he wanted only us and – sometimes to our embarrassment – often ignored strangers who wanted to pet him. He was also very insecure, and fretted whenever one of us was out of sight.

He could, though, certainly teach a few humans how to defuse a potentially aggressive situation. Passive by nature, he would ‘turn the other cheek’ if another male dog approached hoping for a fight. Buddy would simply walk away, leaving the aggressor confused and disappointed!

Buddy was eventually much relieved of his condition by steroids and a grain-free diet. He then enjoyed life in his own undemanding way until August 2017, by which time he was nearly twelve-and-a half, and badly affected by a neurological disorder.
We felt he had suffered enough.

We treasure our memories of a unique Lab, and thank LRSE&C for bringing us together.